Hey, everybody! Do you remember Clicky [1]? Well, we finally got around to analyzing data, so here goes. But first, a brief summary. Matt, Alemi and I came up with the idea for Clicky in the beginning of April. Perhaps "idea" is a bit too generous... it was really just a passing thought: "Hey wouldn't it be cool if we had an internet Ouija board?" It was just a stupid lunch-time discussion that wouldn't have gone anywhere had Alemi and Matt not taken it as some sort of challenge. So after a few hours that night we had Clicky. To say we had some goal with Clicky would be an overstatement. But, if anything, we were kind of hoping to see some sort of Brownian motion. We figured if we had lots of people pulling on the same dot, some kind of Brownian walk would show up. This was grossly overestimating how many people actually view this blog and it turned out that most of the time Clicky was moved by one person at a time. Anyway, what we did end up finding was more interesting than just a Brownian random walk... Behold, in its full 133,000 point glory, Clicky! 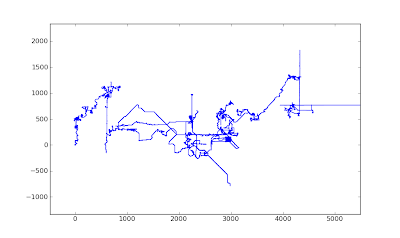 Well, I guess that isn't that impressive. But you can click on it for a larger view or download the data and plot it yourself from here. Alternatively, you can view a super-duper large version of the above picture that will almost certainly make your browser sad (seriously, it's big) at his website here. We note that each step taken by Clicky is 1 unit long, and the above image goes about 2500 on the y-axis and about 5000 in the x-axis. Though we make no explicit comparison between our humble traveler and the great men of lore, we do note that Clicky's long and tortuous path both begins and ends in Ithaca [2]. Now the big picture is all well and good for some folks, but let's zoom in a bit. We'll now zoom into a portion that is about 1000 by 1000 and is located about in the middle of the Clicky map. 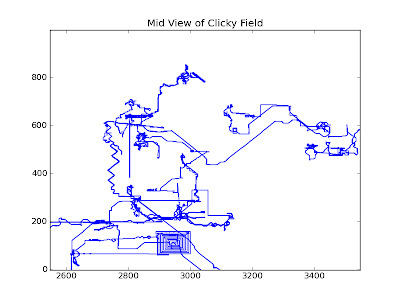 Mid-level view of Clicky. Click for a more cromulent view.

So this view is pretty neat. Whereas the previous view appeared largely random, we start to seem some structure here. We can see that some brave soul has made a spiral that, at its biggest, goes for about a hundred squares (remember, you could only see ten squares at a time!). We can also see that most of the steps are small and tend to cluster, but every now and again there is a large jump to uncharted territory. Neat! Let's zoom in a bit more. Now we will zoom down to about a 100 by 100 square. 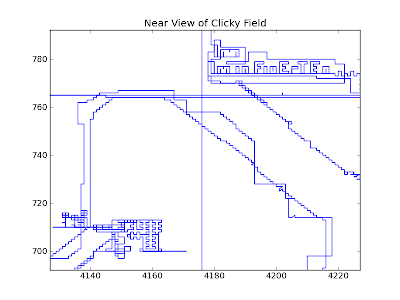 Near view. Note the primitive form of communication.

So this is neat. We see some very non-random structures. We see spelled out the phrase "IM IN FIVE-TEN" (Phys 510 is the required graduate physics lab here). This was actually not uncommon. There are lots of little communications that go on throughout the Clicky map. Most are just people marking their territory, but there are some fun ones. If you find anything neat, let us know! (MILD WARNING: As this was open to The Internet, we make no claims that everything written is appropriate, but the worst thing I've seen so far is "butts lol." So I think you're safe). Now dedication to write something is fine, but how about some real dedication. I found this little Italian gem here, although its means of creation are suspect, to say the least... 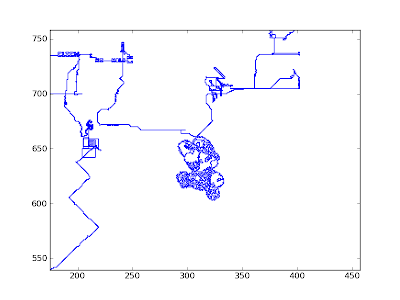 Hot dog. So is there anything quantitative we can say about the path of Clicky? Sure. Let's take a look at the distribution of step sizes. By step sizes I mean the lengths of continuously straight paths. So if you go right for 5 clicks in a row, the length will be five. Unfortunately, this will not include the lengths of diagonal paths. Anyway, here's what I get: 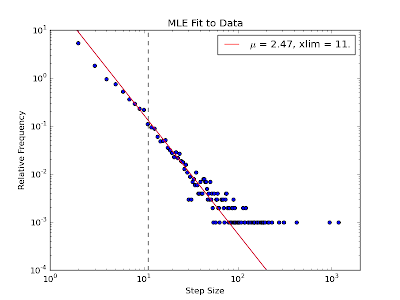 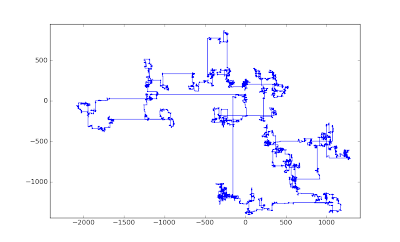 Not exactly the same, but still looks pretty close! So that's all for this installment of Virtuosi Theatre, but there's still a whole lot to be analyzed with Clicky. With that much data, you're bound to find something (whether it's there or not!). So if you find something neat, let us know. (Remember the data can be downloaded as a txt file here).

Superfluous Footnotes: [1] Yes, I know you loved him as Mr. Dottington. I did too! But apparently "the man" thought that was a "lame" name and made it all "commercial" with the buzzname Clicky. So it goes. [2] Although if Clicky is Odysseus, then I guess that makes you Homer. D'oh! [3] [3] All my knowledge of "culture" comes from The Simpsons.