Sorry about the blog hiatus. During the summer, without teaching classes, inspiration is harder to come by. But, tonight I cooked a steak. I recently got a new digital meat thermometer. My plan was to slowly cook the steak until the internal temperature got to be about 140 degrees Fahrenheit with the oven at 200 degrees, take it out, wrap in tin foil, crank the oven to 500 degrees, stick it back in, and give it a nice exterior, reaching an internal temperature of about 150 degrees which would put it at about medium. After I put the steak into the oven though, I started to watch the temperature go up on my digital thermometer and thought, why not take data. And so I did. Here are the results.

Above you see the internal temperature of the steak as a function of time. First some comments about the graph.

Now some comments on the data

Next I decided to look at the heating rate, computed by taking the finite differences of my data points and propagating the errors. 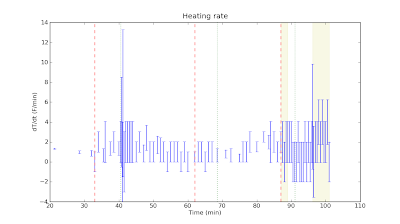 As you'll see, I really didn't have enough data points or a precise enough thermometer to really see the changes in the heating rate. Finally some comments about the food.

I clearly have too much time on my hands. I have one more steak, and I think I'll try a different cooking method. Maybe I'll have the patience to take data again, we'll see.