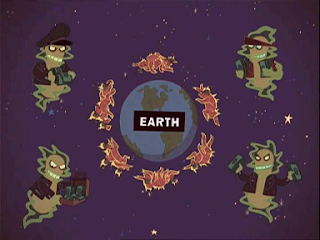 The rotting corpses of sunbeams cause global warming. 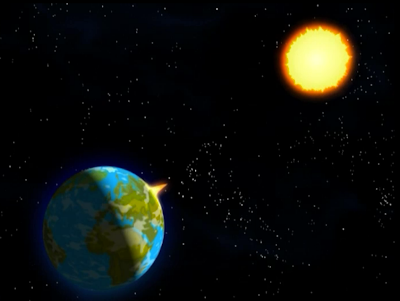 Robots blasting from the Galapagos (which now appear to be in China...)

Alright, so how much effort would it take to give that kind of boost to the Earth? We can quantify this effort in terms of a force or in terms of the energy difference. Let's do both. For the force, we have $$ F = \frac{\Delta p}{\Delta t}=\frac{M_{\oplus}\Delta v}{\Delta t}.$$ Here we are a little stuck unless we can figure out the duration of the robo-boost. Watching the episode again, the robots are blasting up exhaust for about a minute but then the show cuts to commercial. So we don't really know how long they were pushing. Let's just say an hour, but we'll leave the time in if we want to fiddle with that. Plugging in numbers, the total force is $$ F = 6\times10^{24}\~\mbox{N}\left(\frac{\Delta t}{1\~\mbox{hr}}\right)^{-1}.$$ If this force is spread evenly over the billion robots present [5], then each robot would be applying a force of $$ F = 6\times10^{15}\~\mbox{N},$$ which is roughly equivalent to the force it would take to lift up Mount Everest [6]. That wasn't terribly helpful. Let's look at the work then instead. The total work done by the robots to move the Earth is $$ W = \frac{1}{2}M_{\oplus}\left(v^2_f - v^2_0\right) \approx 4\times10^{31}\~\mbox{J}.$$ Well, that's a large number. Could a billion robots feasibly do that much work? If the robots are each 100 kg, then if the mass of all billion robots were directly converted to energy, we would get $$ E = mc^2 = 10^9\times10^2\~\mbox{kg}\times\left(3\times10^8\~\mbox{m/s}\right)^2 \approx 10^{28}\~\mbox{J},$$ or less than a thousandth the total energy needed. So it looks unlikely that the robots would be able to push the Earth, but that was to be expected. Changes to The Orbit Let's take a look at how the robo-boost affects the entirety of the Earth's new orbit. In our first pass through the problem, we ignored the fact that the shape of the orbit changed and only focused on the new semi-major axis. To see why we must also consider the changes to the "shape" of the orbit, take a look at the figure below. 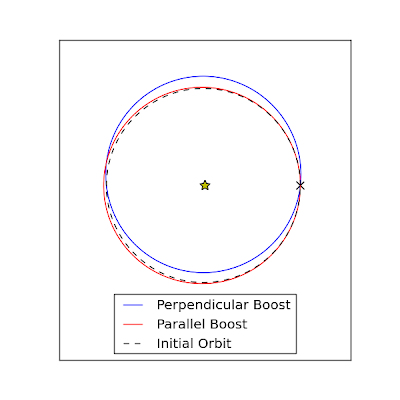 In the figure, the initial orbit is plotted (black dashed line) as well as two new orbits that each have the appropriate semi-major axis so that the period of revolution is one year and one week. The difference between the two final orbits comes from the robots pushing in different directions. In the blue orbit, the boost was made in a direction radially outward from the Sun (that is, perpendicular to the orbital velocity of the Earth). This is the case shown in the Futuramaepisode. In the red orbit, the boost was made parallel to the orbital velocity of the Earth. In each case, the boost was applied at the point labeled with an "X." One thing that jumps out from this figure is that the Earth is always further away from the sun on the red orbit than it was on the initial (dashed black) orbit. But on the blue orbit, the Earth is further away from the Sun than it was initially for only half the orbit. On the other half, the blue orbit would actually make the Earth's temperature higher than it was on the old orbit! The temperature calculation we made earlier should hold pretty well for the red orbit, since it is essentially a circle. It would be a little more tricky for the blue orbit, as one would need to get a time-averaged value of the flux over the course of the whole orbit. A hundred Quatloos to anyone that does the calculation. Wrap-Up So what have we found out here? Well, it seems that there are certain scenarios in which boosting the Earth out to a new orbit with period of 1 year + 1 week could cool the Earth by a few degrees. Granted, we have made some simplifications (the Earth is not a blackbody), but the general idea of the thing should still hold. I had some fun playing around with this problem and I thought it was neat that there was a good deal of information to get started with from the episode. The Futurama people gave an exact period and at least a visual representation of the direction the robots apply their push. So 600 Quatloos for the writers! Not Quite As Useless as Usual Footnotes [1] At least I think it says so if you play this song backwards. [2] According to the Wikipedia page for the episode, the location of the Galapagos for the party was chosen because the writers felt that it would be most convenient to push the Earth near the equator. [3] The semi-major axis of an ellipse is half of the longest line cutting through the center of the ellipse. Likewise, the semi-minor axis is half of the shortest line drawn through the center of the ellipse. Check this out for some more fun stuff on ellipses. [4] This is technically incorrect, since the semi-major axis is measured from the center of the ellipse, but the sun is located on one of the foci. However, this requires information on the eccentricity of the orbit, which we are currently glossing over right now. Our method is then approximate, but becomes exact in the case where both orbits are circles. The effect, however, is minor. At worst, it is semi-minor. Zing! [5] My source for this billion robots number comes from Professor Farnsworth himself. When it looks like the robots will all be destroyed the Professor says "A billion robot lives are about to be extinguished. Oh, the Jedis are going to feel this one!" [6] Well, sort of. The height of Everest is \~10^4 m, so this gives a volume of \~10^12 m^3. The density of most metals is around \~10 g/cm^3, which is \~10^4 kg/m^3. This gives a mass of \~10^16 kg. The weight is then \~10^17 N. Each robot exerts a force of \~10^16 N. So not quite, but hey it was the first thing I thought of and it almost worked out so I'm sticking with it!