In the next posts, I'd like to attempt to make a camera from 'scratch.' And by that, I mean explore the creation of cameras from their components and then create a very primitive one from readily available materials.

In terms of history and simplicity, we should start with the pinhole camera. I've heard stories that Newton used a pinhole camera to look at the sun though I don't know if this was before or after he stared directly at it for 8 minutes. The pinhole is neat because it is so simple. With a pinhole, light is focused simply by restricting the paths which an incident ray may take to hit our film. Typically, diffuse and specular scattering sends light bouncing every which way off an object. The pinhole just restricts which directions hit the film. I think a picture is a better guide to this concept.

For a small hole (aperture) there is approximately one area of the object that will send rays to a particular part of the image. Of course there is a very small angle of error for pinhole cameras made with millimeter sized pins. As the hole increases in size, more rays are incident to the same section of film. And finally, when the hole is big enough for the whole object to be seen through it (think window), no cohesive image is formed.

So if we make the hole small enough, then we can have all the clarity we want, right? Well, I guess so. It would have to be a very circular hole and it would only let in a very tiny amount of light making exposure times long. How to fix this?

Yea, you guessed it. A lens is the answer. It is able to focus light on its own. Now we can collect more light and still make clear images. But the catch is that it only works for a range of distances. So again, lets consider a lens and the images of two objects at different distances. 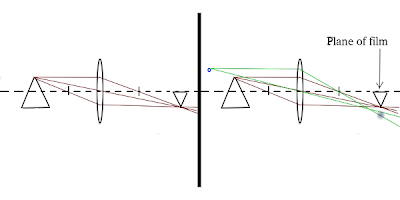 Ray drawing can be done with 3 simple rules (though two are needed in practice).

Using these rules, the first object which is at the proper distance for the film position and focal length of the lens is in focus. However, the rays from the object further away do not converge at the film and so are out of focus.

Here its time for two experiments.

\1) The Window Camera Go to a room with a single window and cover it with thick paper that has a single hole in it. Given enough light, you should see an image on the far wall. If not, hold a piece of white paper up close to the hole. [Edit: I just learned this has a name: camera obscura]

\2) The Doorway Camera Now, find a lens and a doorway. In one room, leave the light on and go to the far wall in the dark room. Bring the lens to the wall until you can see an image. The doorway is the aperature, lens the lens, and wall the film. This demonstration is very simple and not too surprising. BUT SO COOL. I encourage it vigorously. The following pictures were taken of my images in case you can't find a lens. [Edit: I guess this falls under camera obscura too] 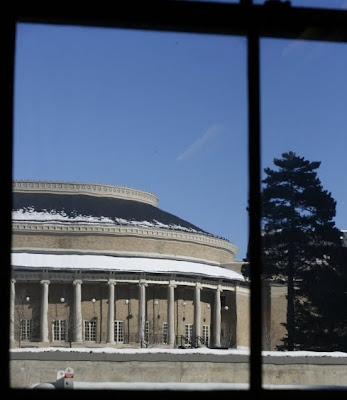 Bailey Hall through a window in the physics building. 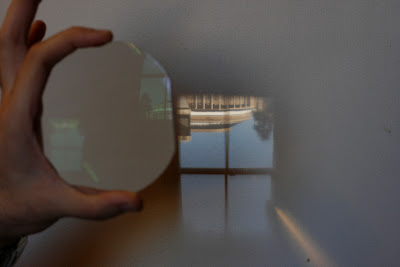 Same scene as imaged with a lens using the window as an aperture. 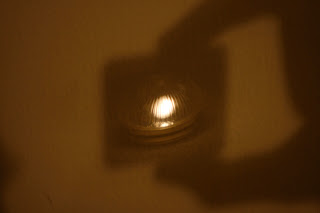 Image of a ceiling light with a smaller lens 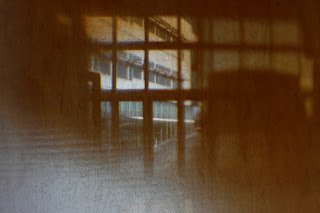 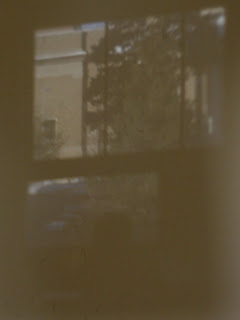 An extra small image (\~1cm on a side) from the lens that will be in next post's camera.

Together, these two elements – aperture and lens – make a very good camera. The lens is able to collect a lot of light and focus it on the film. The aperture can enhance clarity by reducing the number of paths that light rays can take to your lens. It also provides higher order corrections that come from the fact that the lens is probably not perfect. That is, lenses are notorious for misbehaving around the edges and introduce displacements in the whole image as well as between the colors. The aperture helps keep light from traveling through these edges.

Next time, a very simple camera.