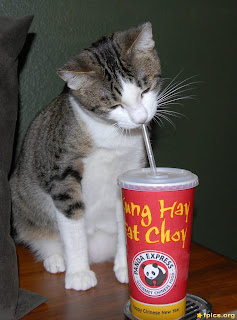 You're doing it wrong!

Here at the Virtuosi, we have a very specific way of asking a very specific type of question that sounds anything but specific. These are the "How come [blank]?" questions [1]. These are very simple questions that just about every four year old asks, but likely never get sufficiently answered. To get a feel for what I mean by these questions I provide the following translations of problems we have either considered or will consider: Q: How come trees? Translation: How tall can trees be? Q: How come plants? Translation: Why are plants green? These are my very favorite types of questions because they are completely understandable by everyone and promise to have very interesting physics working behind the scenes. So I've been thrilled to see two such questions considered by scientists lately that have also had a good run in popular media. They are: Q: How come cats? Translation: How do cats drink? and Q: How come dogs? Translation: How do dogs shake? The question of how cats drink was answered recently by a few dudes from MIT, Virginia Tech and Princeton. One morning, one of the guys was just watching his cat drink water and realized he couldn't immediately figure out how it worked, so he decided to do a bit more research and BAM! science happens. It turns out that the cat isn't just scooping up the water with it tongue as one would probably have expected. Instead the cat uses its tongue to effectively punch the water, drawing up a column of fluid. They then bite this column and get a very itty bitty kitty mouthful of water. Here it is in a slow motion video I stole from the Washington Post who stole it from Reuters: (You'll probably have to sit through an ad, apologies) And here's a series of stills that illustrates the same thing: 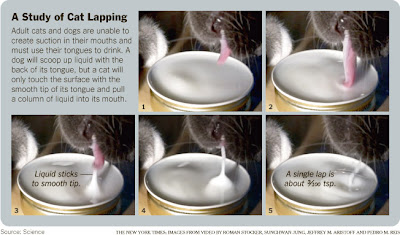 Not a cat person? Well there was also a study done a month or so ago about dog shaking. If you have a dog, you have almost certainly experienced the elegant way in which a wet dog un-wettafies itself. Well, a few students at Georgia Tech were also familiar with this shaking and just happened to have a super high speed camera that could track water droplets. I assume it only took a short period of time to put two and two together and BAM! science happens. In addition to providing the logical extension of the "spherical cow" joke to "dog of radius R", the study also found some fairly surprising results. If we are spinning a wet cylinder (i.e. dog), we would assume that the water is held on by some "sticking force." Then to shake off these droplets, we'd assume that the dog would have to shake fast enough that the centrifugal force would overcome the sticking force. In other equations, $$ F_{centrifugal} = m{\omega}^2 R $$ and $$ F_{sticking} = C $$ So we would then expect the shaking frequency to be the frequency that gets those two guys to equal each other. We would thus predict $${\omega} \sim R^{-0.5} $$ where the little squiggle just means that the frequency scales as the radius to the -0.5 power, with some constant multipliers out front that we don't know so we just ignore. But this is not what the Ga Tech guys observed! Check out the video below: So there's still something else going on that wasn't in our simple model. But this is what makes science so exciting! Even something dogs and cats figured out long ago can have some really rich and interesting physics. So keep on asking those questions! Notes: [1] Interestingly enough, the first "How come [blank]?" questions we asked did not have the now canonical form. Instead, it was stated as "Why are cows?". After much deliberation, we found that the solution is "Because milkshakes." Fair enough.