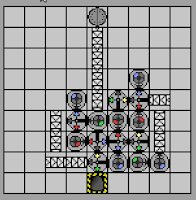 Summer is upon us. That means summer research, and online games. In order to help you through this three day weekend and beyond, I thought I'd share some of the more physics inspired games I've been playing lately to pass the time. I really enjoy physics based games. When done right, I think they can not only be fun and engaging but have the opportunity to teach you something.

First up is a web Colonel Blotto tournament that I coded up, which you can find here. Colonel Blotto is a silly little game theoretic game where you try and assign one hundred soldiers between 10 different fields. Opponents do the same. Neither side knows what the other side is going to do. The game turns out to have some very interesting dynamics. Apparently for more than 12 soldiers, the game does not have a deterministic optimal strategy, so you're guess is as best as mine for how to beat the other players in the pool. Its worth checking out. Feel free to try your hand at the pool. Once the participation has settled down, I want to try and analyze the strategies that people employ and see if I can do any interesting statistical physics with it. I spent a good chunk of this weekend working out the bugs, so it should run smoothly now, but be sure to let me know if you discover any errors.

This game has been sucking up a lot of my evenings lately. Manufactoria is one of the most pleasing puzzle games I've played in a long time. It pretends to be about selecting robots that meat specification, but really its about programming finite state machines. I've really enjoyed this game a lot. It has a real engineering type bent, but unlike a lot of games that require critical thinking to solve a puzzle, once you know how to solve it, it isn't tedious to do so. A great game, and I highly recommend it. One of the best games I've played in a while, although maybe I'm so into it because I'm reading through The Feynman Lectures on Computation right now. He gives as exercises very similar problems to the ones in the game. Its also in regards to these types of problems specifically that he gives this quote. A few tips. (1) You can use asdf or the arrow keys to rotate the pieces. (2) Space bar switches the chirality of the gates (swaps red for blue). (3) In order to round corners, you just make the conveyors meet at a T (4) You don't have to enter the gates on the open side. (5) During tests, move the slider in the bottom left to the right to speed up time. If you manage to solve all of the puzzles, three bonus ones will appear at the bottom.

This one is old. Its been on the internet for a while now, but if you haven't seen Fantastic Contraption you should check it out. Its a very free form game. You need to get the pink block into the goal, but in order to do so, you can build any contraption you desire out of wheels and sticks. Its a great time. Most impressive of course is the level that some kids have taken it to. Once you've played with the game a bit, be sure to search youtube for fantastic contraption, and marvel at the engineering insight some of these kids show. I like this game a lot, but it can get a bit tedious to get your design to work out just right.

This one is neat. As a kid I read the His Dark Materials trilogy (which started with The Golden Compass). Anyway the second book in the series is The Subtle Knife which stars a knife, the subtle knife in fact, which can cut through anything like butter, and I mean anything, including the fabric between worlds. This led to many day dreams as a kid, and I've spent a lot of time thinking about what a knife like that could actually do. Anyway, Splitter 2 is a puzzle game that works along those lines. You have to get a ball do the goal, but do so by cutting through pieces of wood on the stage. A neat game. Worth a look.

While I'm hear, I can't help but mention Phun. While not strictly a game. Phun is a physics sandbox similar in style to Fantastic Contraption, but with a whole lot more features. This one is loads of fun to play with, and I think could really serve as a learning tool for some classes. Worth the download. If you know of any other physics type games, drop them in the comments. I'm always on the look out for good ones.